Tomorrow they say, is another day, and so it turned out on the 26 August in the year of our lord 2016. The weeks prior to this day were full of doom and gloom, news from around the world was of the crisis with the world economy, but the biggest threat to the world went almost unnoticed, except for a handful of scientists at CDE Porton Down, England and USAMRIID Maryland USA.

It was reported in the news as another Ebola out break, after the 2015 outbreak the worlds media corporations did not give it any airtime, they thought, as we all did, that we had the vaccines to deal with it, how wrong we were.

The day in question, Friday 26th August 2016, was like most days in Provenance, a small Town in Massachusetts, clear skies with a slight cooling breeze off the North Atlantic Ocean, temperatures where high for the time of year. The Tropical storm during the night of the 24th not only carved a trail of destruction in it’s wake, but also carried in the virus that was to cause so much chaos.

August 26th ushered in what became known as the “Apocalypse Dawn”.

Provenance Town, is, was well named, for me at any rate, but for the rest of the population of three thousand souls, it was not. I was not affected by the virus, or to give it is proper name EBOV-VP430 (a mutation of the Ebola Zaire strain) that brought mankind to its knees. Unlike the previous strain of the virus, it didn’t kill the host, just put it into a sort of comatose state, a creature capable of movement but not of rational thought, which feeds on human flesh. A Zombie you might say.

The weeks that followed, where a blur, I really cannot remember what happen, its as if my mind has but up barriers to those memories and I do not have the right permissions to access them.

So now, almost a month later I find myself on highway I-495 outside the town of Rochester. I was on the hunt for fuel when I came across an abandon Samba Bus, it looks as if the owners have fled or worst, turned. I have never felt so alone, as I do now.

I cant be the only person still alive, can I?

This is my latest project, you can find the build here. 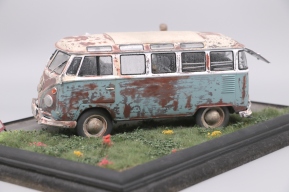