The American motor car industry produced outstanding number of military vehicles during the 5 years of World War 2. Those were widely used not only by the U.S. troops but also by the allied troops. The U.S. was literally the arsenal of democracies. As World War 2 was the first modern mobile warfare, logistics was of greater importance than ever Sometimes, it was even more important to ensure smooth supply lines than to develop better ordnance. Many kinds of vehicles were used to supply operations, and among them, the 2 ½ ton truck, known as “Jimmy” or “Deuce and a half”, was one of the most mass produced vehicle, recording production of 810,000. The nickname “Jimmy” was derived because the majority of the total production was done by the GMC firm. The most widely used engine was Type 70 with a displacement of 4,416cc, yielding 104 horsepower. The power was transmitted to the wheels via a five speed transmission. Two types of driving axles were offered to the truck. One is “Banjo type” manufactured by Chevrolet and the other is “Split type” made by Timkin. Apart from the driving axles, many components, suh as the cabin, cargo body and chassis frame, varied according to the manufactures and various uses. Variants included the normal steel-body cargo truck, water tanker, gasoline tanker, cargo-dump truck and multi role type with a tipping cargo body. The most popular variant, GMC CCKW-353 with normal cabin and long wheelbase of 164 inches, weighing 4.8 ton, had a carrying capacity of 2.42 ton on rough roads and 4 ton on pavement. The maximum speed reached was 72km\h. Having the then first class performance like these, the 2 ½ ton trucks ran across all the battle fields as a means of transport for the Allied forces and played an important role to bring about the victory for the Allies. After its retirement from the U.S. Army in the early 50’s, they were transferred to all over the world and had a great influence on the progress of today’s military motorcars.

This features in the “Village Street” Diorama. 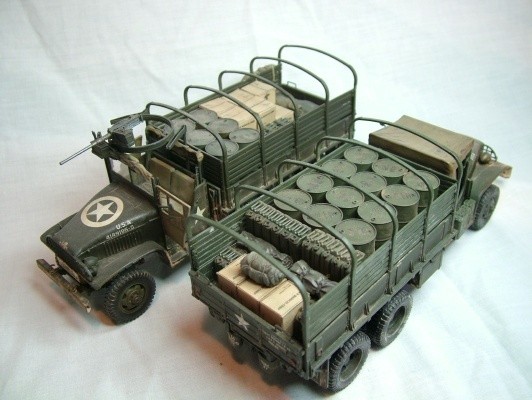 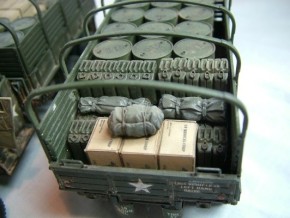 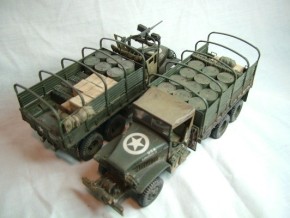 Model Shows I will be attending 2022